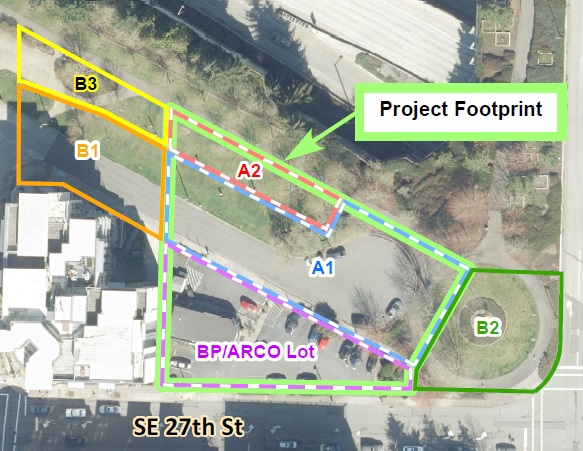 Nov 14, 2019 – The City of Mercer Island is moving ahead with a property purchase to bring the proposed Town Center Commuter Parking and Mixed-Use Project a step closer to construction.

Last year, the City announced that it was seeking an experienced development team to design and build the project on and near the Tully's site (see map), to consist of City-owned commuter parking, a performing arts facility in partnership with the Mercer Island Center for the Arts (MICA), and a mixed-use residential and commercial structure based on the City’s Town Center vision and code. The property, adjacent to the future Sound Transit Light Rail Station and site of the former Tully’s coffeeshop, also formerly hosted a gasoline service station operated by the Atlantic Richfield Company (ARC).

As a first step, in June 2018, the City Council approved a Purchase and Sale Agreement (PSA) with the sellers of the property. Since then, the City has been actively engaged in due diligence research including extensive environmental assessment of underground contamination on the site, including a portion of Sunset Highway to the north and nearby WSDOT-owned properties.

Following extensive negotiations, a Reimbursement Agreement has been prepared with the known polluter, ARC, which will reimburse the City for the majority of clean-up costs arising from excavation, segregation, transport and disposal of contaminated soil as part of the redevelopment of the property. The environmental consultant estimates the site cleanup will cost between approximately $9 million with redevelopment and approximately $19 million without redevelopment. The City intends to pursue other known funding sources to recover additional site clean-up costs.

At its Tuesday meeting next week (view November 19 meeting documents), staff is recommending that the City Council authorize the Interim City Manager to execute the Reimbursement Agreement with ARC

By year’s end, the City intends to complete the acquisition of the Tully’s site, which when combined with the adjacent portion of Sunset Highway (“Parcel 12”) that the City already owns and a small portion of WSDOT property, will allow the project development to move forward.

The City, MainStreet Property Group (MainStreet), and MICA, are currently negotiating project development terms. MainStreet, in partnership with the City and MICA, intends to complete construction before East Link light rail opens in 2023. If development plans change or negotiations fail, the City may consider alternative uses for the property, but all petroleum contamination will be cleaned up regardless, under the supervision of the appropriate environmental regulatory agencies.

This project has ended