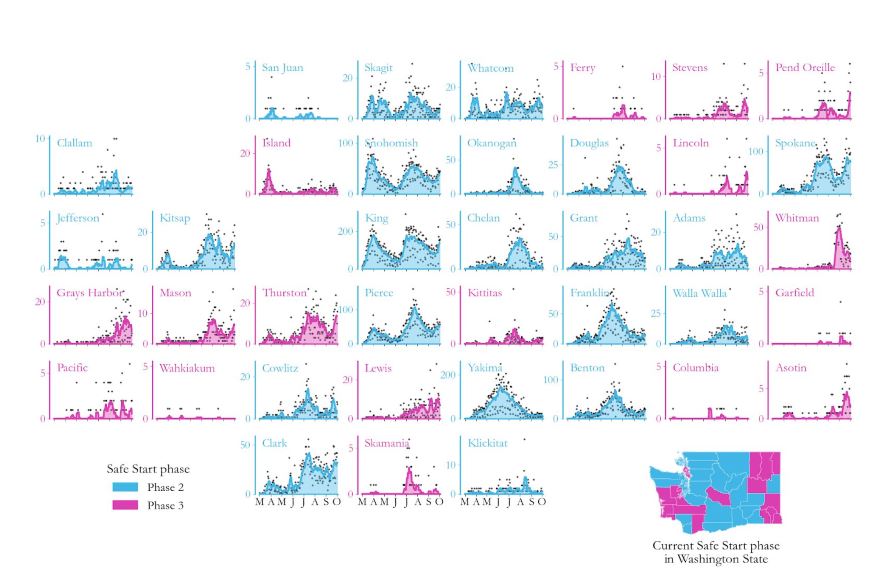 On October 14, the State Department of Health (DOH) released the latest statewide situation report on COVID-19 transmission. Report findings include:

The situation in eastern Washington is unstable and efforts to control the spread of the virus must be strictly maintained or intensified to avoid a backslide. This instability is clear in case and hospitalization numbers, where we’ve seen increases and decreases at various points in September rather than the desired steady downward trend. The proportion of positive tests to total tests also remains high. Per person, the case rate in eastern Washington is twice as high as in western Washington and the daily hospitalization rate is more than twice as high.

Case counts in western Washington are increasing across all age groups and over broad geographic areas. This suggests increases are due to broad community spread, not driven by a single type of activity or setting. Though all age groups are seeing increases, the rising trends among older people are particularly concerning because these groups tend to experience more severe illness.

Trends are also mixed in counties with flat or decreasing case counts. In Spokane County, the steep increase in cases in early to mid-September may have reached a plateau. Case counts are fluctuating in Whitman County, with some likely increases in older people following a recent spike in the college-age population. Cases remain flat in Yakima County. Grant and Grays Harbor counties are seeing steady declines, and Whatcom County is starting to see decreases as of the start of October.