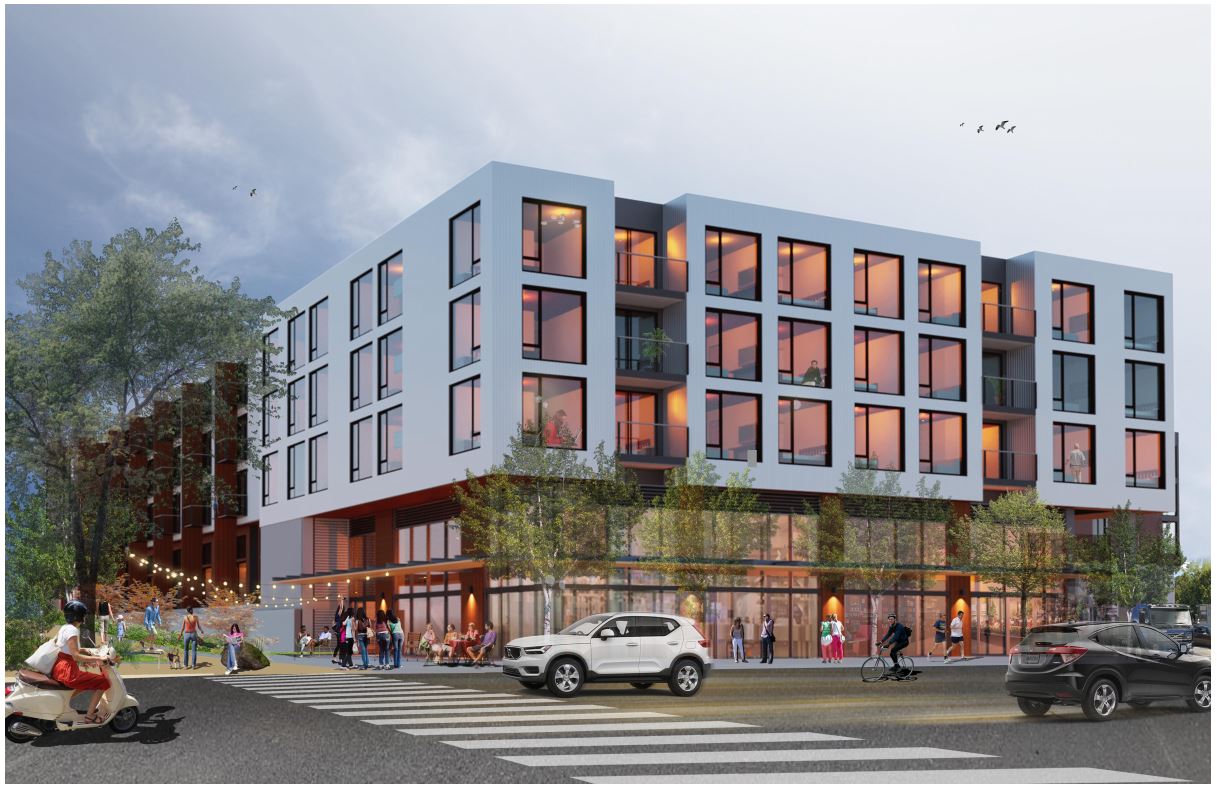 An application has been received by the City for Design Review for a new mixed use building located at 2750 77th Avenue SE and 2885 78th Avenue SE . The proposed building will be 4 stories above grade with 164 apartments units, including 17 affordable units. Also included is 10,742 of ground level retail space, located along 78th Avenue (facing QFC) as well as 77th Avenue (facing New Seasons) and two levels of below ground parking, including residential parking and 35 retail parking stalls.
The proposal includes a through-block pedestrian connection extending between 77th Avenue and 78th Avenue. To make this connection more inviting, landscaping including trees and a water feature are being provided. The project is also proposed to include three public plazas. They will be located at the corner of 78th AVE SE and SE 29th ST, at the main entrance of the building along 78th Ave SE, and at the western end of the through-block connection at 77th Ave SE. These areas will be open to the public. They will contain landscaping including a water feature, pedestrian scale lighting, bike racks, picnic tables and other types of seating, and art.
In addition to the public spaces, a private courtyard is proposed for tenants. A service loading area for tenants move-in, food delivery and trash collection purposes is proposed, with access via a driveway off of 77th Avenue.
The proposed plans include several updates in response to Design Commission feedback in 2019, including the following:

The project documents, including the proposed building plans, submitted by the applicant can be viewed in the Project Document Cloud File. As the project review evolves and additional documents are submitted by the applicant, they will be added to the project folder.
The public comment period began on January 27, 2020 and extends until February 26, 2020. This project will be subject to a public hearing at the Design Commission at a future date. Public hearing notices will be distributed at least 30 days prior to the hearing. While the initial public comment period expires on February 26, 2020, public comments are welcome any time until the close of the public hearing.
Written public comments may be submitted by email , postal mail, or in person at the Community Planning and Development counter. Verbal comments may be provided to the Design Commission during the comment period at the public hearing. To become a party of record and receive future project notices, please submit a public comment or send a message to the project contact indicating that you would like to be a party of record.
Share on Facebook Share on Twitter Share on Linkedin Email this link